Can a smart app encourage HIV-self testing in Canada? 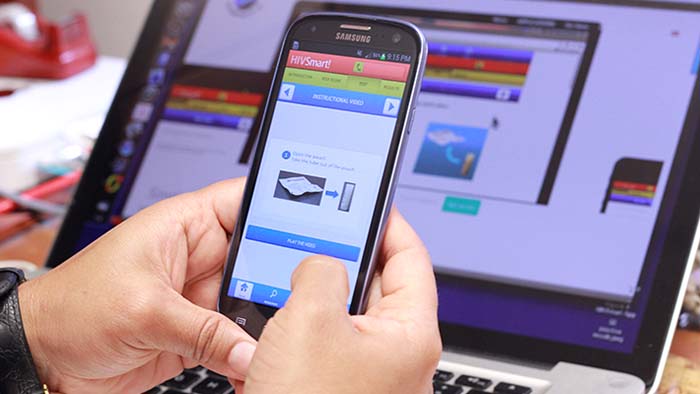 HIV self-testing strategies have been recommended by the World Health Organization (WHO) since 2016, as they empower people to find out HIV their status at their convenience. However, home-based testing kits have yet to be approved for sale in Canada. For the first time in the country, a team from the Research Institute of the McGill University Health Centre (RI-MUHC) and collaborators from Clinique Médicale l’Actuel, in Montreal, evaluated an unsupervised HIV self-testing program via a smartphone and tablet application called HIVSmart!, among an at-risk population (men who have sex with men). The findings of their study have been published online this week in the Journal of Medical Internet Research.

“To reach the first 95 of the so-called 95-95-95 targets set by UNAIDS* by 2030, it is imperative that we help detect HIV in those who are living unaware of their HIV status. A screening strategy that has the potential to reach the undiagnosed is HIV self-testing,” says Dr. Nitika Pant Pai, lead author of this study and a researcher from the Infec-tious Diseases and Immunity in Global Health Program of the RI-MUHC, and an associate professor of Medicine at McGill University. “HIVSmart! plugs all the gaps in the self-testing process; it works with any approved HIV self-test, facilitates testing and proactively informs the user.”

“By promoting screening, HIVSmart! could help to reduce the number of people living with HIV who do not know their status and allow them to start treatment earlier,” adds Dr. Réjean Thomas, study co-author, who is also the founder and CEO of Clinique Médicale L'Actuel. ‘’An application such as HIVSmart! increases accessibility to testing, especially outside major cities, where it is sometimes harder to get tested because of confidentiality issues.”

HIVSmart! is available for smartphone, tablet or web-based (Android, iPhone, and iPad) confidential software app that was developed by Dr. Pant Pai and her team at the RI-MUHC.  It informs, interprets and stores data confiden-tially but, most importantly, it links users to counselling or care quickly and encourages the user to stay in care. Initially developed with funding from Grand Challenges Canada, HIVSmart! was evaluated in Montreal thanks to this study funded by the Canadian Institutes of Health Research (CIHR).

Between July 2016 and February 2017, researchers conducted a study on 451 men who have sex with men (some-times referred to as MSM) aged 18 to 73 years who presented themselves at the Clinique Médicale L'Actuel to be tested for HIV. They were offered an in-home saliva-based HIV Test and a tablet equipped with the HIVSmart! App. The strategy mimicked testing in an unsupervised home environment. Using HIVSmart!, participants were guided through the self-testing process, learning how to perform and interpret the test, store results, and receive care swiftly.

“Our study shows that the HIVSmart! App strategy is feasible, accepted and preferred by an educated, urban MSM population in Montreal,” says Dr. Pant Pai. “As a strategy, it suits individuals who prefer to test themselves at their convenience in the comfort of a private space such as their home, office or kiosks. That’s empowering!”

“At present, we have all the means to eradicate HIV. The HIVSmart! App is a way to support patient autonomy,” says Dr. Thomas. “Promoting screening reduces the number of people who do not know their HIV status, puts HIV-positive people on treatment quickly so their viral charge becomes undetectable, and, ultimately, eradicate HIV.”

Researchers plan to adapt the HIVSmart! self-testing strategy for many at-risk populations in Canada and worldwide, thereby maximizing its public health impact. HIVSmart! strategy is also being tested in South Africa.

This work was funded by the Canadian Institutes of Health Research (CIHR) and the Fonds de recherche du Québec – Santé (FRQS).

The HIV Smart! project is supported by a generous financial contribution from the MUHC Foundation.

The Research Institute of the McGill University Health Centre (RI-MUHC) is a world-renowned biomedical and healthcare research centre. The Institute, which is affiliated with the Faculty of Medicine of McGill University, is the research arm of the McGill University Health Centre (MUHC) – an academic health centre located in Montreal, Canada, that has a mandate to focus on complex care within its community. The RI-MUHC supports over 420 re-searchers and close to 1,200 research trainees devoted to a broad spectrum of fundamental, clinical and health outcomes research at the Glen and the Montreal General Hospital sites of the MUHC. Its research facilities offer a dynamic multidisciplinary environment that fosters collaboration and leverages discovery aimed at improving the health of individual patients across their lifespan. The RI-MUHC is supported in part by the Fonds de recherche du Québec – Santé (FRQS). rimuhc.ca