null Coming together: A good move for the Centre for Outcomes Research and Evaluation 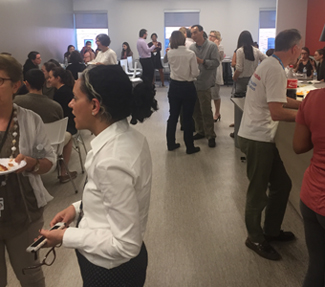 Over 50 population health researchers at the Research Institute of the McGill University Health Centre (RI-MUHC) and their research teams experienced a smooth move this spring to new headquarters adjacent to the Glen site. The move to 5252 de Maisonneuve Boulevard West puts members of the Centre for Outcomes Research and Evaluation (CORE) in close contact with colleagues in basic and clinical research who moved to new infrastructure at the Glen in 2015.

According to CORE director, Dr. Michael Kramer, “The move has been a real shot in the arm for Glen-based CORE researchers, staff, and trainees—a much-needed morale booster.” He commended the transition team of Wanda Cromlish, Nancy Steenart, Jean-Marie Chavannes, Lucie Grégoire and André Simard for their energy, effort and efficiency.

“Renovations at 5252 de Maisonneuve were completed on time and to everyone's satisfaction,” said Jean-Marie Chavannes, director of Research Information Technology, Infrastructure and Biomedical Engineering at the RI-MUHC, a few days after the May 15 move.  “Our transition team worked closely with a number of research and MUHC services, and with the moving company, HCR. In total, 55 researchers, 149 staff members and 136 students were relocated from five different MUHC sites. The comments received following the move were overwhelmingly positive.”

Topping this good news, Dr. Kramer said that work has started on renovations of additional space earmarked for the CORE on research premises at the Montreal General Hospital of the MUHC (MGH-MUHC). Thanks to funding awarded to McGill University from the federal-provincial Strategic Investment Fund, most of the remaining CORE researchers and personnel will be housed on this second site of the RI-MUHC in 2018.  To help CORE members integrate and interact across the new sites, as Dr. Kramer explained, improved security and other services will be provided for MGH-based CORE researchers still located at the heritage site of the Royal Victoria Hospital of the MUHC, and these members will have access to shared temporary space at 5252 de Maisonneuve.

While researchers, staff and trainees celebrated their arrival at 5252 de Maisonneuve over a pizza lunch, new CORE manager Dr. Dominique J. Favreau shared a behind-the-scenes look at the move in the following interview. 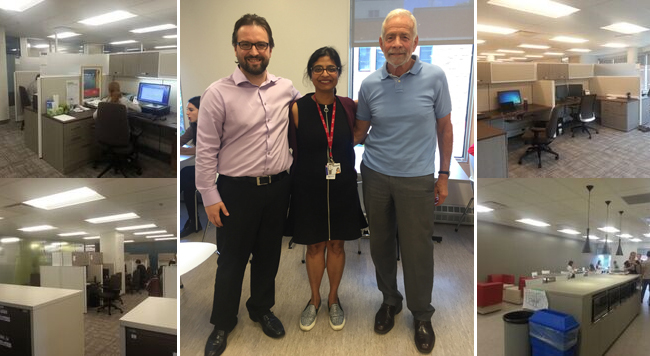 It’s clear today that the CORE is coming together and finding a new focus. What were the reasons for this move?

DF: For about 15 years our researchers at the RI-MUHC were grouped in several research axes, and the decision was made to restructure these axes into research programs by 2015. Then across the new programs we formed three centres: the Centre for Translational Biology, the Centre for Innovative Medicine, and our own Centre for Outcomes Research and Evaluation, the CORE. Yet our CORE researchers remained scattered in locations all over Montreal – on Saint Catherine Street West and in various McGill-affiliated hospitals. The goal was to bring them together and create a community where they could interact—not just by email, as if they were in different countries – but as members of the same research institute, sharing resources, forming new groups and teams, jointly supervising trainees, and attending the same seminars. When researchers are scattered, it’s hard to have the scientific interaction among colleagues that helps develop their individual ideas. We needed the space to create that interaction on a daily basis.

How long did it take, from the decision to provide quarters here for the CORE to the action?

DF: A little over a year, since funding was confirmed in 2016. CORE personnel could not be accommodated at the new hospital, so it was necessary to launch a project to find space elsewhere. There were discussions at many levels: within the RI-MUHC, with government, with the MUHC Foundation, which participated in fundraising, and with the Canada Foundation for Innovation.

What are the research teams’ first impressions?

DF: For now everyone is still in the moment, interacting a lot, excited as they begin to discover new collaborators. With the move behind us and boxes unpacked, everyone’s in high spirits.

DF: Yes, that’s important as many CORE researchers are clinicians and sometimes the line between those roles is blurred. They juggle clinical, research and teaching tasks all day. These researchers need to work in proximity, for clinical reasons but also for interaction among research programs. When rheumatology researchers get together with cancer researchers, for instance, that’s when innovative projects are born!

Was that the reasoning to opt for open office space?

DF: Yes, as with closed offices, we don’t see much of colleagues except in the cafeteria. An open concept promotes exchange.

What’s the next event?

DF: Today’s pizza lunch is the first internal gathering at the new site, to encourage an atmosphere of exchange. In September we’ll have an official site launch with representatives of the MUHC, RI-MUHC and MUHC Foundation.