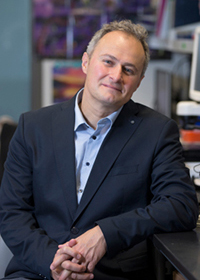 My research focuses on investigating the cellular and molecular mechanisms involved in cross-talk between innate and adaptive immunity to major pulmonary infectious diseases influenza and tuberculosis, which are serious threats to humans. Although seasonal influenza is not a major risk to the general population, influenza virus has a high rate of mutation which leads to constant antigenic changes. Drastic antigenic variation may occur through genetic re-assortment of RNA genome segments between two strains of influenza viruses. When these new strains are introduced into a human population, a devastating pandemic can ensue. TB is already a devastating disease, infecting one third of the population, killing approximately two million people annually. Thus we need to understand the immunopathogenesis of these diseases for prevention as well as novel therapy. The immune system has evolved to protect us against variety of pathogens including viruses, bacteria, and parasites, and the host utilizes multiple different strategies to defend us against all these variety of pathogens. Understanding the different arms of immunity are essential for the future development of an effective therapy or vaccine.