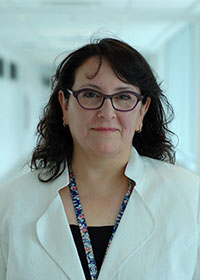 My research focuses on addressing molecular mechanisms of the breastfeeding /lactation hormone prolactin (PRL) in women's health. Breast cancer is the most diagnosed cancer in women and is a major health concern for women worldwide. Several epidemiological studies have suggested that there is a link between breastfeeding and protection against breast cancer. The molecular mechanisms for these protective effects are not well investigated. In my lab, I have made significant contributions in characterizing PRL signaling and have pioneered and provided a new concept in PRL regulation of breast carcinogenesis. I have shown that PRL regulates epithelial plasticity of breast cancer cells leading to suppression of their invasive aggressive phenotype. We have also shown that exposure of mammary cells to PRL makes the cells resistant to the proliferative effects of EGF, a growth factor implicated in breast carcinogenesis. These findings highlight a new PRL mediated mechanism controlling breast carcinogenesis. Elucidating mechanisms that help protect the breast against cancer may provide new avenues for the development of novel breast cancer therapies.