Alessandra Ricciardi, a passion for research and for sharing knowledge

As a teenager, 26-year-old Alessandra Ricciardi found infectious diseases "really cool", so she applied to study Biological Sciences as an undergraduate student. But it was the concrete experience of working in a lab during her studies that propelled her into research. After she finished her undergraduate studies in Microbiology and Immunology at McGill University, Alessandra Ricciardi joined the National Reference Centre for Parasitology (NRCP) lab at the Montreal General Hospital (MGH) in September 2011 as a Microbiology & Immunology master's student. It was a significant opportunity for her, since the NRCP lab is directed by Dr. Momar Ndao, researcher and world-renowned parasitology expert at the Research Institute of the McGill University Health Centre (RI-MUHC). The following year, she fast tracked into the PhD program.

"I really enjoy the environment in a lab and being involved in a project from beginning to end," she says. 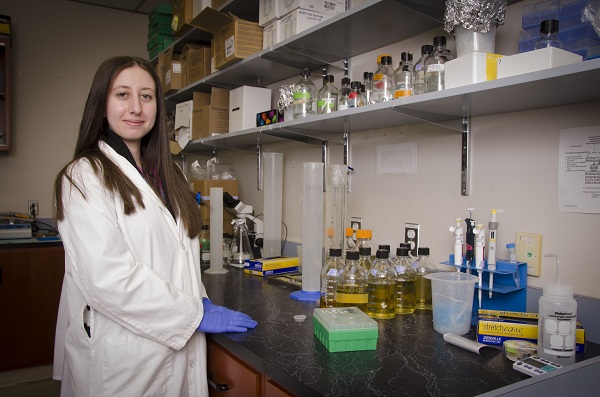 Right now, Ricciardi is at the initial stage of a research project that is testing different proteins in mice models to determine if they have any protective potential against Schistosoma mansoni, a parasitic worm that's endemic in Africa and South America and infects about 83 million people worldwide.

"Our lab has already shown that one of these proteins can protect mice from infection," she says. "The next step is to determine the mechanisms involved. These are the first stages in the development of a vaccine."

In February, Ricciardi and dozens of other researchers will move to the new RI-MUHC facilities at the Glen site. At the Centre for Translational Biology, where she will be working, she hopes to encounter the same atmosphere of camaraderie and collaboration that exists now at the MGH.

"I have to say this lab is phenomenal," she says with a smile. "Even though we all work on different projects, everyone is ready to help someone else at the drop of a hat. It's wonderful."

Ricciardi visited the new facilities at the Glen when she hosted a kiosk for the NRCP during the Open House in December. Communicating her passion for science is a way for the young researcher "to have balance in life".

"Even if I love research, I also like teaching, mentoring and volunteering. It detaches me from the rigorous aspect of research and makes me enjoy it more."

She particularly appreciates the involvement of the RI-MUHC in community projects. Last December, she participated in the event, TD Discovery Day in Health Sciences. Over the day she gave dozens of students from high schools across Montreal a glimpse of what it's like to be a scientist.

"Students visit our lab and usually have lots of questions. It's very nice."

Ricciardi thinks it's important to tell young people who are considering a career in Health Sciences not to put too much pressure on themselves.

"There are other options besides going to med school," she says. "Research is such a broad field and specialties often overlap. Even if you change your mind later, your background in research can open doors for you elsewhere."

As for her own future, Ricciardi says she'll probably continue her postdoctoral research, after she completes her PhD studies.

"I'm really inclined to pursuing the academia route, but I may try working in the pharmaceutical industry for a while. What I know for sure is I enjoy my work and I definitely want to stay in research."