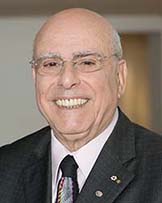 Source: MedE-News. The Government of Québec revealed this month the names of the 35 people who will be honoured through induction or promotion within the Ordre National du Québec. Honorees included Dr. Phil Gold, the Douglas G. Cameron Professor of Medicine and Professor of Physiology and Oncology at McGill University and a venerable former member of the Research Institute of the McGill University Health Centre. Dr. Gold will be promoted to Grand officier, the Order’s highest rank. Read the MUHC press release here.

On May 22, 2019, the venerable Dr. Gold also received an honorary doctorate from the University of British Columbia (UBC) during their convocation ceremony, recognizing his “extraordinary contributions as a physician, teacher, leader and humanitarian.” Congratulations Dr. Gold! Read more.