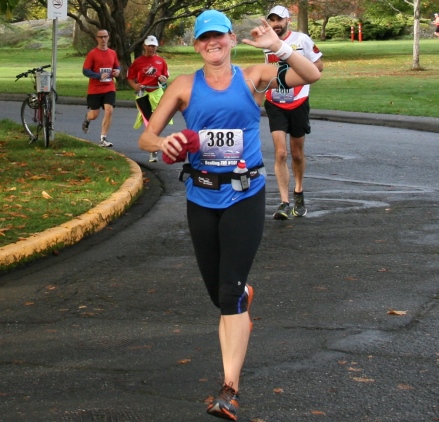 On October 11, clinical research coordinator Kimberley Kotar ran the Victoria Goodlife Fitness Marathon to complete a goal she had set for herself. Ten provinces, ten marathons. The idea was to raise funds and awareness for children affected by transverse myelitis (TM). The challenge was that she, herself, is living with TM, a neurological disorder caused by inflammation across one segment of the spinal cord.

An employee of the Research Institute of the McGill University Health Centre (RI-MUHC), Kotar had friends and colleagues from several clinical research laboratories pulling for her. She was also buoyed by support from her companions in coping, members of the Canadian Transverse Myelitis Association that she founded in 2010.

"Kim has managed to do what most people would consider impossible," said Dr. George Thanassoulis, her supervisor and a researcher in the Cardiovascular Health Across the Lifespan Program at the RI-MUHC. "I hope her story motivates others to remain active and pursue their dreams, no matter what."

How did this journey across Canada start?
KK: Nine years ago my life changed dramatically with a transverse myelitis diagnosis after I was struck with partial paralysis. I remember being told categorically by my doctor that I could forget running marathons. I never expected to start a national association, let alone run a marathon in every province to raise funds and awareness to help others with the disease. Yet I ran the Montreal Marathon in 2008, went on to complete two Boston Marathons and one in New York City, then decided to cross Canada.

Did you ever doubt yourself?
KK: When I set out to run a marathon in every province, even I thought it would be impossible. But as with everything else along this journey of mine, I knew that I had to try.

How did you do in Victoria?
KK: The race was tough as the course was hilly and I had to deal with a ton of transverse myelitis symptoms. I finished the race with a time of 3:55:46.

What did it feel like to cross the finish line in that tenth province?
KK: My comeback has been an incredible experience and completing this goal is an exceptional, once-in-a lifetime kind of event. I feel so blessed because I have been able to do something only 31 people in the world have done despite living with transverse myelitis.

What's next?
KK: A marathon in May, somewhere on the U.S. East Coast probably. It looks like Iceland will be my next big target after that. I plan to continue to concentrate on raising awareness and funds to help others with transverse myelitis.