A means to an end: PhD research student Steven Jones aims for career in public health

PhD candidate Steven Jones seems to have found the "right fit" for him in Dr. Martine Culty's lab which is part of the Research Institute of the McGill University Health Centre (RI-MUHC) at the Glen site. After earning a BSc at the McGill School of Environment and a Master's at INRS (Institut national de la recherche scientifique), he decided to pursue his training in experimental medicine at McGill University.

"This is a great place to study, if you find the right lab and a research area you're passionate about," says the Montreal native whose father was a researcher working in the pharmaceutical industry. Jones would like to use his research background to ultimately work in a regulatory agency or international NGO aimed at promoting health. 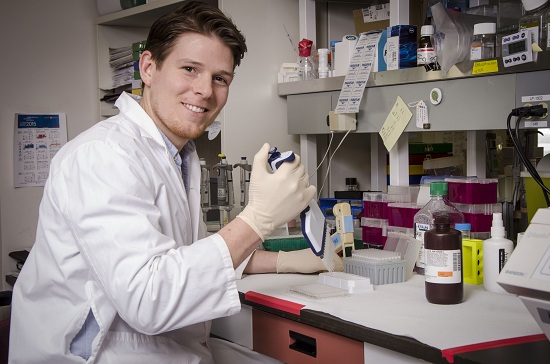 "I went into research to make some kind of difference in society," he says.

At the moment, Jones hopes basic research conducted by him and his colleagues in Dr. Culty's lab will one day be used to influence policy decisions or health interventions.

"We are interested in normal male reproductive biology and how it can be affected by environmental exposures," he explains. "Male fertility has decreased worldwide over the past century and there is a greater incidence of male reproductive abnormalities, such as testicular cancer in young men. Our lab and others believe exposure to common environmental toxins in early life is driving these concerning trends."

Jones wants to prove that there is a link between exposures to specific classes of toxins, individually or in combination, and male reproductive abnormalities. He is working with endocrine disruptors, which are natural and manmade chemicals capable of interfering with normal hormone functioning during critical periods of development. At the moment, most of his experiments involve phytoestrogens, natural components of soy beans and soy derived products, including soy based baby formula, and phthalates, industrial additives used in PVC plastics. Nowadays, phthalates can be found in a wide variety of items, including hospital supplies, household and baby products and baby toys.

"Soy contains phytoestrogens, which are natural chemicals that resemble female sex hormones," he says. "Phthalates have been reported as compounds capable of suppressing testosterone production The problem is that they are not chemically bound to plastics and can leach out, resulting in inadvertent ingestion." "We suspect exposure to phytoestrogens and phthalates during pregnancy and early postnatal life will alter normal development and predispose men to reproductive abnormalities."

Since the beginning of March, Jones has been working in the brand new facilities of the RI-MUHC at the Glen, where there are plenty of resources and opportunities to learn and interact with colleagues.

"The type of work I do involving basic toxicology research would interest public health agencies such as Health Canada or international NGOs such as the World Health Organization (WHO)," he explains. "They need people at all ends of the spectrum."

Although the field of research is more challenging and competitive than it used to be 20 years ago, Jones believes there are opportunities for students who acquire "marketable skills and find their niche".

"PhD students are valued because they have strong analytical and problem solving skills, are team players, and can write and speak well. Still, it's important to do something unique or something that has multiple applications to separate yourself from the pack."

Jones is currently taking elective courses in epidemiology and global health to help bridge the gap between basic research and broader scale health research and policy.