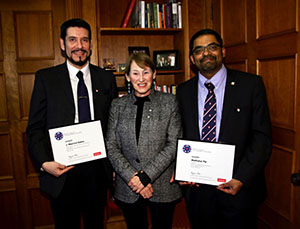 Source: McGill Reporter. Dr. Madhukar Pai, Director of the McGill International TB Centre and the McGill Global Health Programs, is the winner of this year’s Principal’s Prize for Public Engagement through Media from McGill University, in the academic category.

Also a scientist in the Research Institute of the McGill University Health Centre, Dr. Pai was recognized by the judges for his role in helping to focus global attention on tuberculosis, the leading infectious killer of humanity.

In addition to his many opinion pieces, media interviews, and active presence on social media, Dr. Pai has advocated for the Canadian government to invest more to combat the high TB rates in Inuit communities. In 2018, he was the only academic invited to speak on TB at the United Nations. His work with the World Health Organization was highlighted in the New York Times. Thankfully, the world has committed to end the TB epidemic by 2030.

“I am proud to be at a university that values academic engagement with the media, policy makers and the public at large,” said Dr. Pai. “As I grew up in my career, I realized that it was not enough to be an academic and publish a paper. If you want to do something about the issues that are important to you, you have to engage with the media and policy-makers. Even if it’s scary.”

Related News: Reaching beyond the hallowed halls of academe