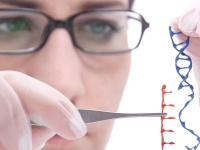 Medical genetics relates to almost every human condition, from cancer to tuberculosis and brain tumours, as well as drug resistance and vaccine development. Research in this axis is focused around three central themes: identification of genes associated with disease, mechanisms of genetic disease, and applied genetics.

Gene and mutation discovery continue to be major themes for both simple Mendelian traits and for complex genetic and infectious diseases. Mouse models of complex genetic traits and multifactorial diseases, epigenetic germline modification, and host resistance to infection, have been developed and continue to play an important role in the understanding of human genetic disease. Statistical genetics studies, which involve the mapping and identification of genetic variation contributing to disease, are a crucial underpinning of the analysis of complex genetic diseases.

The introduction of new technologies to identify mutations or cytogenetic abnormalities, and the development of testing procedures for recently characterized disorders are continuing objectives of the axis. Large-scale genomics projects such as Genetic Regulation of Disease (GRID) and genome sequencing of important pathogens such as C. difficile were initiated by axis researchers at McGill University and Genome Quebec Innovation Centre.

In addition to advancing our three central themes, axis researchers are also studying the role of susceptibility genes, and conducting research that will lead to a more detailed understanding of gene-gene and gene-environment interactions in disease. The capability of the Genome Centre to generate large datasets on allelic variants in populations raises ethical issues that must be dealt with if society is to benefit from the influx of new knowledge, which is why ethical, legal and social issues also continue to be essential components of the axis program.