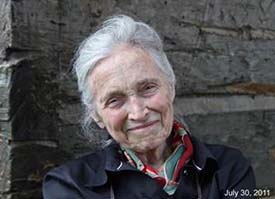 We are all saddened by the passing of Dr. Margaret Becklake on October 17, 2018. Recognized globally for her work in respiratory medicine and epidemiology, she was a guiding light in the McGill community, the founder of the Respiratory Epidemiology and Clinical Research Unit (RECRU) and a distinguished member of the Research Institute of the McGill University Health Centre (RI-MUHC) for many years. Dr. Becklake was a tremendous mentor to all whom she encountered. She asked amazingly provocative questions, whether as an expert in the field or just due to her innate sense of curiosity. Always positive and encouraging, she was a true example to the entire research community. We’d like to share a few tributes to her life below.
—Bruce Mazer, MD
Executive Director and CSO (Interim), RI-MUHC

A McGill giant and pioneer

We recently lost a McGill giant and pioneer of clinical epidemiology and health outcomes research, Dr. Margaret Becklake. A beautiful obituary on her work, contributions, and character is published in The Globe and Mail (read article). She was a role model to all clinician scientists, scientists, and clinicians, and certainly to women in these roles. Please take a moment to read and reflect on her life.
—Kaberi Dasgupta, MD
Director, Centre for Outcomes Research and Evaluation, RI-MUHC

She has inspired several generations to come. This is a huge loss for the research community, far beyond McGill and Quebec.
—Jean Bourbeau, MD
Director, Centre for Innovative Medicine, RI-MUHC

Dr. Becklake (I never felt fully comfortable calling her Margot, despite all her efforts) was a world leader and expert whom I was very fortunate to have as a close colleague and mentor. I knew her from the time she supervised my Masters in epidemiology at McGill until we moved from the former site of the Montreal Chest Institute of the MUHC to the Glen in 2015, and she finally truly and completely retired – a span of almost 30 years.

Dr. Becklake founded the Pulmonary Research Lab, a unit for epidemiologic lung research conducted by clinicians. This became the Respiratory Epidemiology Unit (REU) and is now the RECRU, whose members include almost half the Respiratory Division – a tribute to that vision. She also founded the McGill Summer Program in Epidemiology to give international students a chance to come to McGill, including many could not afford the tuition for full-time studies. The other target group was practising clinicians, who would have the chance to study epidemiology even if most could only afford to take off a month or two at a time. As if that was not enough, she co-founded with Sonia Buist, via the International Union, the International Respiratory Epidemiology training courses still offered every year.

In addition to these impressive achievements, she had an amazing research track record in the field of pulmonary diseases wrought by occupational exposures to asbestos, and dust of any kind. This included studies of the combined effects of these occupational exposures and cigarette smoking, and of the interaction of these agents and gender in producing lung diseases. Her publication record spans 60 remarkable years, beginning in 1951. And, when I first joined the REU, I learned that Dr. Becklake had held continuous funding from the Medical Research Council (now the CIHR) for the prior quarter century – a record that I doubt anyone else in respiratory research at McGill has matched.

But, to be honest, these legacies and legends pale beside the stories of Margaret Becklake as a human being. I have a lot of memories, but will tell only three as examples that demonstrate different sides of her.

First – her civic responsibility. Every spring she would summon all occupants of Lady Meredith House to the front hall. There she would distribute garbage bags and out we would go, with her in the lead, to pick up the winter’s remains so the grounds would be clean in time for the bluebells to flower. Not even Ollie Miettinen was excused from this duty.

Second – her incredible energy. One year I attended the International Union Conference in Paris. I had just made it to the conference after an overnight flight, then the usual BMW (bus metro and walk), and I was feeling, and I am sure looking, pretty haggard. I ran into Dr. Becklake shortly after arriving, and she commiserated with my sleep-deprived state. When I mentioned that she also looked a little tired she admitted she was, but partly because, she thought, she had already been to Paris and home again earlier that week. This was her second trip to Paris in a week!

Third – her caring. Long before global health was a popular term or concept, Dr. Becklake felt that McGill had a duty to train international students. She fought to get them admitted to McGill, found them scholarships or scrounged up other funding, even her own, helped them find a place or found them a place to stay in her house, and simply looked after them from first contact until long after they had finished and gone home. She also picked up “strays” – students whose supervisors had abandoned them, whose projects had gone astray, or who were in other ways left shipwrecked on McGill’s shores. She never refused a student’s distress signal, although sometimes others, like me, were enlisted to help as well.

To sum it all up – a truly remarkable woman. I was privileged to know her. I will miss her.

Resolution on the Passing of Dr. Margaret Becklake McGregor (1922-2018)

It is with great sadness that we share the news of the passing of Dr. Margaret Becklake McGregor, Emerita Professor in the Department of Epidemiology, Biostatistics and Occupational Health at McGill University.

A world-renowned expert in respiratory medicine and epidemiology, Dr. Becklake was born in London, England, and raised in South Africa, where her father served as director of the country’s mint. She earned undergraduate and medical degrees from the University of the Witwatersrand in Johannesburg prior to completing postdoctoral training back in London, specializing in what was then the emerging field of respiratory physiology.

Dr. Becklake returned to her alma mater in Johannesburg after her postdoctoral work, conducting groundbreaking research examining the effects of dust inhalation on workers in gold mines. This would lead to her most important contribution, becoming the first to demonstrate that work-related dust exposure could lead to the development of what we now know as chronic obstructive pulmonary disease, or COPD, which was at the time thought to be exclusively cigarette-related. In addition to providing affected miners with the possibility of compensation they were previously denied, this observation was critical to our understanding the pathophysiology of this common disorder.

In 1957 Dr. Becklake moved with her family to Montréal. Her arrival at the start of McGill’s program in clinical pulmonary physiology would be crucial in establishing pulmonary research at the University.  Over the course of more than six decades of exceptional contributions to research and education, she continued to advance our knowledge in fighting lung disease. A Medical Research Council of Canada Career Investigator from 1968 to 1993, Dr. Becklake was a role model to numerous young researchers, in particular women in medicine. Many of her students would go on to become leaders in their fields both at McGill and internationally.

An honorary member of the International Union Against Tuberculosis and Lung Disease, Dr. Becklake’s many prestigious awards highlight the esteem in which she was held by her peers. In 2001 she received the World Lung Health Award from the American Thoracic Society. In 2007 she was named to the Order of Canada and in 2011 to the Ordre national du Québec. Most recently, the Montreal Chest Institute Foundation announced the launch of the Dr. Margaret Becklake Fellowship, which will pay the salary of at least one trainee in respiratory research each year from low- and middle-income countries and from Canadian indigenous communities.
Recognized as a preeminent expert in the field of lung disease from exposure to dusts and minerals, Dr. Becklake will be remembered for the way she brilliantly balanced the roles of researcher, clinician, educator and mentor. She leaves behind a legacy that spans the globe.

We extend our condolences to her husband, former Dean of Medicine at McGill Dr. Maurice McGregor, to her children James and Margaret and their spouses, her grandchildren, great-granddaughter, and to the rest of her family, friends, colleagues and to all those she touched over the course of her extraordinary life. She will be greatly missed.