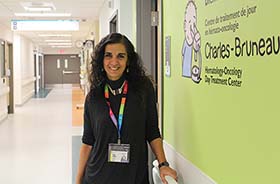 Montreal  – In Canada, cancer remains the leading cause of illness-related death in children. In an effort to accelerate research breakthroughs and ensure a faster path to a cure for children living with resistant, recurrent or metastatic cancer, more than 30 pediatric research centres and non-profit organizations are joining forces to support the PRecision Oncology For Young peopLE (PROFYLE) program, an initiative of the Terry Fox Research Institute. This unique partnership represents $16.4 million in funding, over a quarter of which will come from Quebec.

Terry Fox PROFYLE seeks to tap into world-renowned Canadian expertise in genomics and pediatric oncology. The program uses real-time molecular profiling to personalize treatment for patients with tumours that are difficult to treat with conventional therapy, no matter where they live in Canada. Eight-year-old Karl from the greater Montreal area is one of these patients.

Karl was six when he and his parents found out that a persistent pain in his arm was in fact ganglioglioma, for which the prognosis in children is less than encouraging. “It was such a shock. We could barely wrap our heads around it,” his mother Josée recounted. They were told that the chances of being able to completely remove Karl’s tumour, which was lodged in his brain stem, were slim and that the repercussions could be serious. Fortunately, an experimental treatment was available through Terry Fox PROFYLE. “Instead of undergoing highly complex surgery, Karl is taking a pill to shrink the tumour. This has given him back his mobility and let him return to school.” Learn more