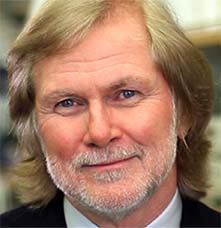 Presented by The Cancer Research Program

Ras Proteins and their Regulators in Human Disease

Ras proteins play a direct, causal role in many human cancers, including pancreatic cancer and lung cancer. Drugs that bind directly to these proteins, or prevent their processing, are being tested in the clinic and in pre-clinical models. Proteins that regulate Ras are also involved in human diseases. Inactivation of Ras GAPs cause neurofibromatosis, Legius Syndrome, Arteriovenous malformations and autism, as well as many forms of human cancer. Recently, we have found that the LZTR1 pro-tein degrade the Ras-like protein RIT1 and is directly involved in Noonan Syndrome, schwannoma and neurofibromatosis type 2.

Attempts to target RAS proteins directly have been hampered by the lack of a deep pocket to which small molecules could bind. However, new biophysical and chemi-cal techniques have facilitated these efforts, using NMR-based drug design, tethering and Second Harmonic Generation, among others. These efforts will be described, including identification and development of compounds that block KRAS processing by covalent modification of the CAAX box cysteine. Clinical data from trials involving inhibitors of HRAS processing will also be discussed.