Game-changing study on treatment of latent tuberculosis shows a novel, short therapy is safer and more effective in children and adults than standard therapy

Montreal, August 1, 2018 – Treatment of latent tuberculosis (TB) is set to transform after two studies from the Research Institute of the McGill University Health Centre (RI-MUHC) revealed that a shorter treatment was safer and more effective in children and adults compared to the current standard. These findings are published today in the New England Journal of Medicine.

Led by Dr. Dick Menzies, the study followed 850 children and 6,800 adults with latent TB, a dormant version of the disease that does not cause symptoms but may lead to serious illness if treatment is not provided. This study in children is one of the largest for a pediatric clinical trial related to TB. 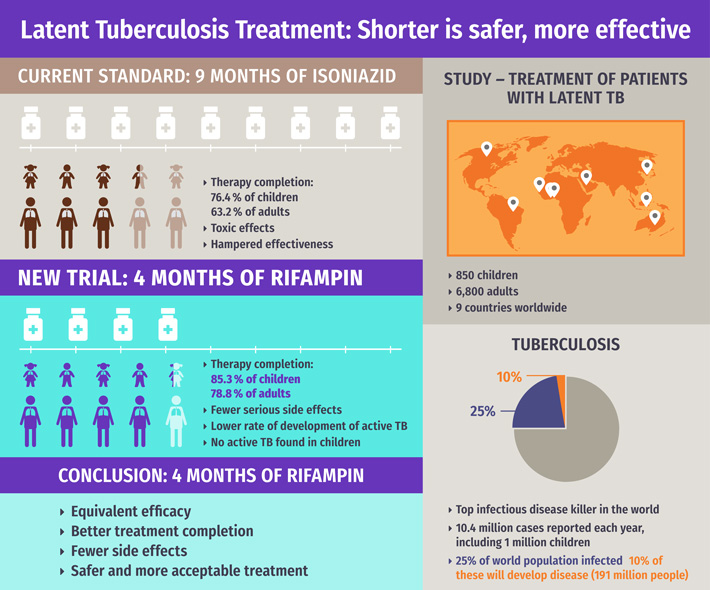 Dr. Menzies’ team compared results among latent TB patients who underwent the current standard treatment of nine months of isoniazid (INH) or a four-month treatment with rifampin. Over 85 per cent of children completed rifampin without developing active TB compared to 76 per cent of children who completed isoniazid, with two developing active TB.  Results were similar in adults; acceptance and completion of rifampin therapy was much better with significantly fewer serious side effects, particularly drug induced hepatitis (INH can cause serious liver toxicity which can prove fatal or require a liver transplant).

In addition to being a much shorter treatment, the rates of development of active TB were slightly lower with rifampin, indicating that it is at least as effective as the nine-month treatment of INH in preventing TB.

“This four-month therapy is a fundamental game-changer in TB prevention,” says Dr. Menzies, who is a respirologist with the MUHC and a professor of Medicine, Epidemiology and Biostatistics at McGill University. “The four month treatment was as effective in preventing TB, safer and more acceptable. We believe this four-month rifampin treatment should replace the nine months on INH for most people who need therapy for latent TB.” 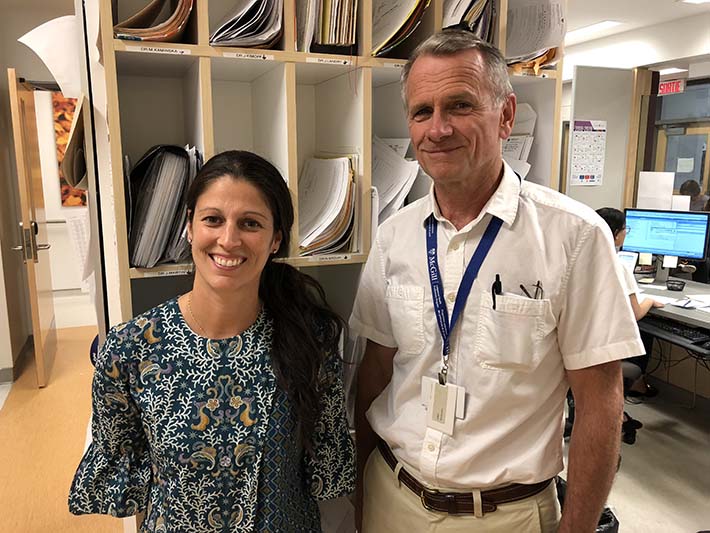 “These discoveries will fuel a new look at global practices,” says Dr. Menzies, who has acted as an advisor to the Public Health Agency of Canada, Citizenship and Immigration Canada, the Centres for Disease Control (CDC), and the World Health Organization (WHO) on TB. “We expect this discovery to have a substantial impact on TB, which remains the number one infectious disease killer globally, causing more deaths than AIDS, malaria, diarrhoeal diseases, or other tropical illnesses.”

"These painstakingly careful and highly elucidative studies underline the superlative work from Dr. Menzies’ group, which has been creating new paradigms in the diagnosis and treatment of TB for over two decades," says says Dr. Bruce Mazer, Interim Executive Director and Chief Scientific Officer of the RI-MUHC.

Treatment of latent TB infection is a key part of the End TB strategy & TB-elimination plans in high-income countries from the WHO. One-quarter of the global population is infected with latent TB and 10 per cent of these will develop active TB.

About the Research Institute of the MUHC
The Research Institute of the McGill University Health Centre (RI-MUHC) is a world-renowned biomedical and healthcare research centre. The Institute, which is affiliated with the Faculty of Medicine of McGill University, is the research arm of the McGill University Health Centre (MUHC) – an academic health centre located in Montreal, Canada, that has a mandate to focus on complex care within its community. The RI-MUHC supports over 420 researchers and close to 1,200 research trainees devoted to a broad spectrum of fundamental, clinical and health outcomes research at the Glen and the Montreal General Hospital sites of the MUHC. Its research facilities offer a dynamic multidisciplinary environment that fosters collaboration and leverages discovery aimed at improving the health of individual patients across their lifespan. The RI-MUHC is supported in part by the Fonds de recherche du Québec – Santé (FRQS). rimuhc.ca