When she finished her Masters in Epidemiology degree at the University of Western Ontario, Sandra Magalhaes decided to take a step out of the academic environment and get some real-world experience. For three years she worked as a clinical research project manager at the Hospital for Sick Children in Toronto (SickKids) on a Canada-wide study of Pediatric Multiple Sclerosis* (Pediatric MS), a rare autoimmune and neurodegenerative disease that accounts for less than five per cent of all MS cases and has become increasingly studied in the last 15 years. 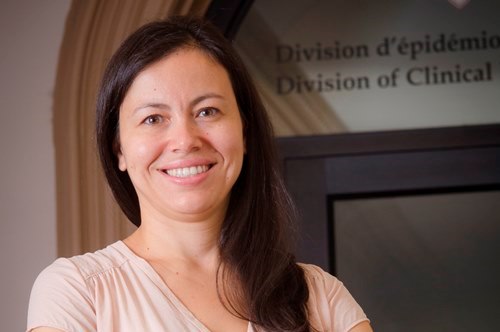 "I worked with Dr. Brenda Banwell and managed several research projects involving study set-up, data collection, patient recruitment, and data analysis," says the PhD candidate in the Department of Epidemiology, Biostatistics and Occupational Health at the Research Institute of the McGill University Health Centre (RI-MUHC). "When I started my PhD since 2010, I was really able to connect the concepts we were learning in class with the reality of conducting research, because of my work experiences."

While working at SickKids, Sandra became involved with endMS, a Canada-wide research and training program created in 2007 by the Multiple Sclerosis Society of Canada. She immediately saw the benefits of being part of a collaborative and multidisciplinary scientific community.

"Thanks to the endMS program I have developed a large network of established researchers and young trainees, both nationally and internationally," she says. "Moving forward I already have an idea of the people I could work well with. Doing research is hard work, so you want to enjoy it."

Within the context of her PhD project, under the supervision of Dr. Christina Wolfson, director of the Neuroepidemiology Research Unit at the RI-MUHC, Sandra is developing a toolkit for researchers who are examining the environmental risk factors of pediatric MS.

"Kids are usually diagnosed between 10 and 15 years of age," she says, "but we believe Pediatric MS develops earlier in life, so it's important to develop a questionnaire that asks parents the right questions. Based on the literature, I'm focusing on three risk factors: deficient vitamin D intake, little sun exposure and passive smoking. But since this is a toolkit, we want to include others in the future, such as not breastfeeding."

Sandra has received studentship awards from McGill University, the Canadian Institutes of Health Research and the MS Society of Canada, and her research grant is funded by the US National MS Society.  For her project, the PhD student received endorsement and input from the International Pediatric MS Study Group (IPMSSG), which is made up of more than a hundred members from over 40 countries. She then put together a group of 13 researchers, including pediatric MS neurologists, epidemiologists and those with expertise in each of the three risk factors she is focusing on.

When she finishes her PhD next Spring, Sandra intends to move to Italy with her husband and their two-year-old son. As a postdoctoral fellow at the University of Ferrara, Sandra will be involved in a study to assess the relationship between breastfeeding, the microbiome and MS. In the long run, the ideal career move would be to go into academia.

"I have a good knack of explaining statistics," she says. "It makes me so happy when someone understands it."

Having a toddler in tow while pursuing a career in research is not something that hinders this young researcher's productivity. On the contrary.

By the end of the year, Sandra expects to have an online questionnaire that will not only help researchers characterize risk factors and save time, but also allow them to pool the data down the road and get good sample sizes for future studies. Some members of the international pediatric MS research community have already shown interest in using the toolkit.

* Canada has the highest incidence of multiple sclerosis in the world. MS is the most widespread neurological disease affecting young adults in the country. It is generally diagnosed in people aged 15 to 40 years old, and its unpredictable effects last a lifetime. (Source: MS Society of Canada)